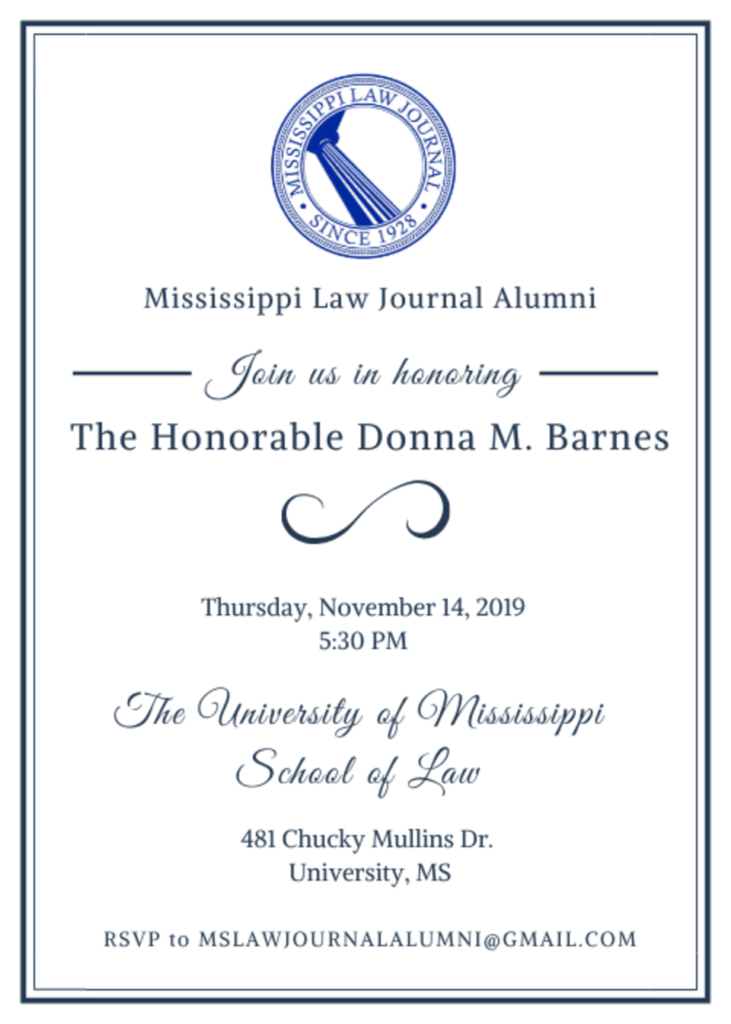 The MLJ Fall Alumni Event will be held in the atrium of the Law School on Thursday, November 14 at 5:30. The Journal is proud to honor Judge Donna Barnes as our distinguished alumna. Judge Barnes is the first female chief judge of the Mississippi Court of Appeals. For more information on our distinguished guest, please read through her bio below.

In 1996, she took sabbatical to study law at the University of Cambridge, where she was one of three American students in the LL.M. program which that year admitted 152 attorneys from 48 countries. Her studies included international commercial litigation, comparative public law, international human rights, and law and practice of civil liberties. A member of Magdalene College, Judge Barnes earned her Master of Law from the University of Cambridge in 1997.

Judge Barnes was honored as the 2019 recipient of the Susie Blue Buchanan Award. The annual award, presented by the Mississippi Bar’s Women in the Profession Committee, honors an outstanding woman lawyer who has achieved professional excellence and has actively paved the way to success for other women lawyers.

Judge Barnes is a member of All Saints Episcopal Church and the Mary Stuart Chapter, Daughters of the American Revolution, both of Tupelo.

If you have any questions or concerns, please email our Alumni Coordinator, Jack Schultz, at tjschult@go.olemiss.edu. Please RSVP to mslawjournalalumni@gmail.com.